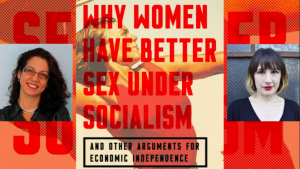 Kristen R. Ghodsee, an acclaimed ethnographer and professor of Russian and East European Studies, spent years researching what happened to women in countries that transitioned from state socialism to capitalism. She argues here that unregulated capitalism disproportionately harms women, and that we should learn from the past. By rejecting the bad and salvaging the good, we can adapt some socialist ideas to the 21st century and improve our lives.

Women are standing up for themselves like never before, from the increase in the number of women running for office to the women’s march to the long-overdue public outcry against sexual harassment. Interest in socialism is also on the rise—whether it’s the popularity of Bernie Sanders or the skyrocketing membership numbers of the Democratic Socialists of America. It’s become increasingly clear to women that capitalism isn’t working for us, and Ghodsee is the informed, lively guide who can show us the way forward.

Ghodsee & Sarah Jaffe will discuss why capitalism is bad for women and how, when done right, socialism leads to economic independence, better labor conditions, better work-life balance and, yes, even better sex.

Kristen R. Ghodsee has her Ph.D. from UC Berkeley and is professor of Russian and East European Studies at the University of Pennsylvania. She has written six books on gender, socialism, and post-socialism in Eastern Europe, examining the everyday experiences of upheaval and displacement that followed the fall of the Berlin Wall in 1989. Ghodsee also writes on women’s issues for the Chronicle of Higher Education and is the co-author of Professor Mommy: Finding Work-Family Balance in Academia. Her articles and essays have appeared in publications such as Eurozine, Dissent, Foreign Affairs, Jacobin, and the New York Times.

Sarah Jaffe is the author of Necessary Trouble: Americans in Revolt, which Robin D.G. Kelley called “The most compelling social and political portrait of our age.” She is a Nation Institute reporting fellow and an independent journalist covering labor, economic justice, social movements, politics, gender, and pop culture. Her work has appeared in The New York Times, The Nation, the Guardian, the Washington Post, the Atlantic, and many other publications. She is the co-host, with Michelle Chen, of Dissent magazine’s Belabored podcast, as well as a columnist at The New Republic and New Labor Forum.