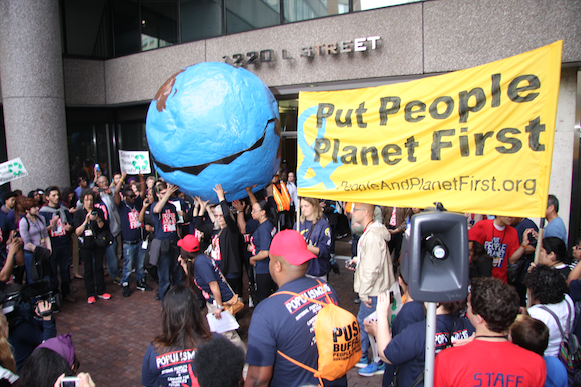 Donald Trump wants to destroy the planet–that’s often how it feels, but never more than when he’s dismantling protections against the ravages of climate change. On Tuesday Trump’s latest executive order dropped, opting out of the Clean Power Plan and removing other regulations designed to mitigate against climate crisis. Trump did so with a group of coal miners at his back, but his plan actually will do little to help those coal miners. I spoke with Jordan Estevao of People’s Action, a network of community organizations with a climate justice program that comes out of its organizing in directly-affected communities.

There are multiple states that had no plans to comply anyway. Actually, since last summer it has kind of been in limbo, the regulation, because as Antonin Scalia’s final act as a Supreme Court Justice he and the Court issued a stay on the order, which has left the states that wanted to keep on complying on track and some states waiting to see what happens. But, there is still lots of potential to win good policies. Our Illinois affiliates, Illinois People’s Action and Fair Economy Illinois, just recently passed the Illinois Future Energy Jobs Act which is going to double Illinois’ renewable energy production. It is going to invest between $500 and $750 million in low income communities for energy efficiency, renewable energy, job training, so that low-income people can get into that kind of work, and so on.

I think what a lot of folks on the right and in the Trump administration are missing is that the transition to clean energy, to energy efficiency actually could be a huge economic driver and a way to revitalize our economy, especially since the coal industry is already going under. It is already being undercut by fracking and low oil prices. Coal companies have been going bankrupt at a really high clip with no end in sight. He is not going to bring those jobs back. There is no bringing them back. What we do need to do is figure out where we can invest so that we can start to rebuild an economy that actually puts people to work and also is good for our environment and slows climate change.

END_OF_DOCUMENT_TOKEN_TO_BE_REPLACED 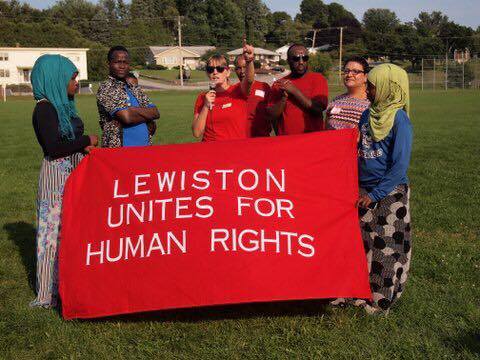 The GOP dropped its “healthcare” plan this week, which seems to have pleased neither the right nor, obviously, the left. But organizers on the ground have been seeing the holes in the Affordable Care Act for years, as Cait Vaughan of the Southern Maine Workers Center notes. To move forward, simply defending the ACA won’t be enough, without understanding the human need (particularly in the time of the opioid crisis) and the ways in which the system has left many out.

The single payer movement has been around for a long, long time. There have always been people calling for a universal health program in this country. What the Healthcare is a Human Right campaign does differently, by using a human rights framework and by using not just a legislative strategy or even a ballot initiative strategy, we are trying to do true base-building that actually engages people around “What are your rights? Do you know them? Do you claim them?” Then, “Do you demand a different life based on knowing that you have human rights?”
Some single payer folks are really scared of that model. We have gotten pushback saying, “That is too bold a model. That is going to alienate the average person.” What they mean by the “average person” is probably a conservative white person who maybe doesn’t have a lot of money and maybe doesn’t have a lot of education. They are afraid that it alienates those people by saying “human rights.” What I have found is it is the opposite. For me, if I go up to someone and I just shove a policy solution at them and say, “Sign onto this” they are a lot more likely to be like, “No. Why are you talking to me like that?” You are just talking at somebody.
What we have done is engage people on values and talk to them about what they think human rights are and what it means to their lives. The response that I have gotten is that whether people have a good or negative reaction to it, they have a reaction that causes them to engage. And making such a bold claim – which is sad that it is such a bold claim, but whatever – actually gives us room to nudge people’s analysis forward.

END_OF_DOCUMENT_TOKEN_TO_BE_REPLACED 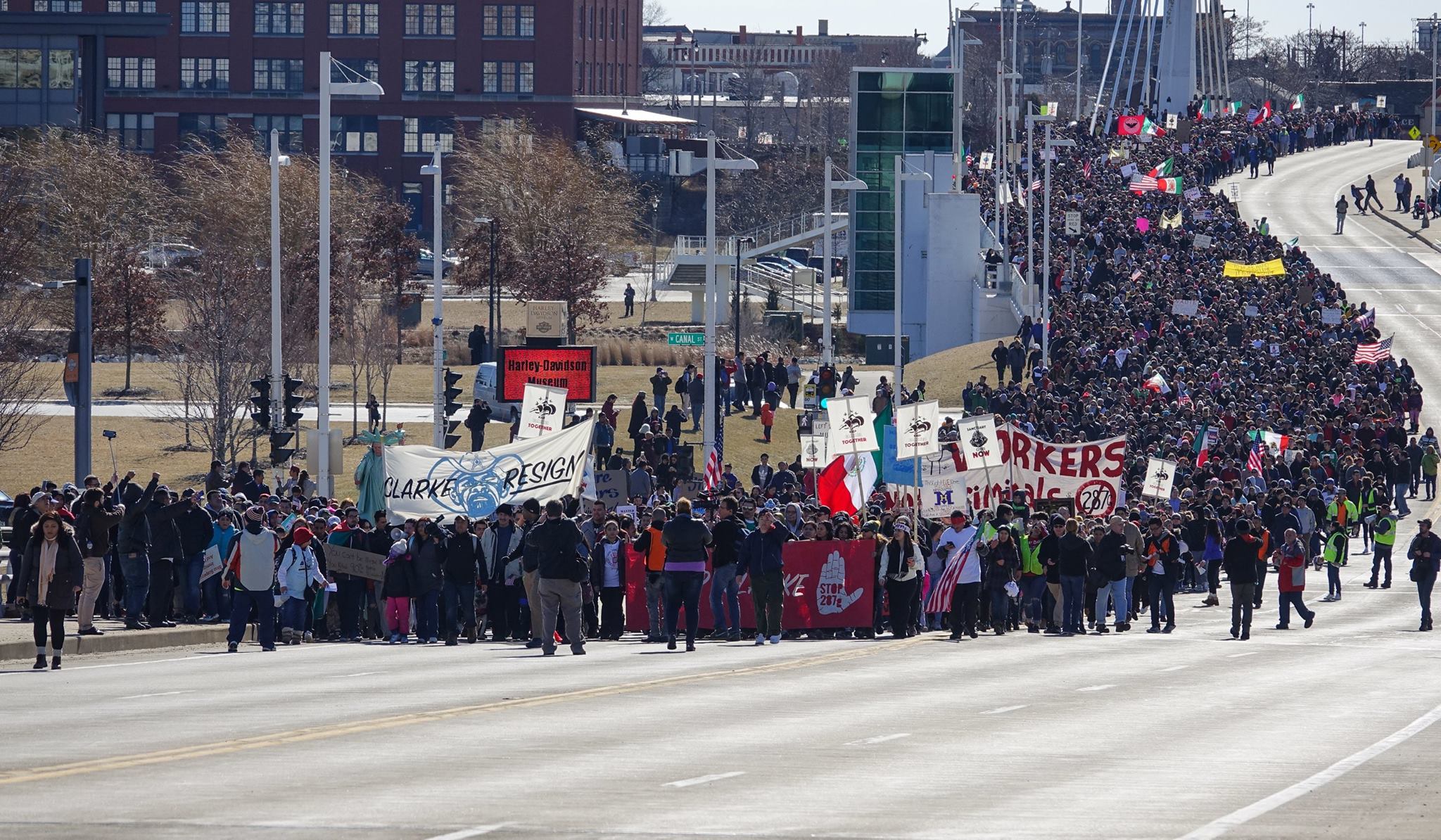 Across the country last week, immigrants went on strike to demonstrate what the country would be like if Donald Trump actually followed through on his promised deportations. The “Day Without an Immigrant” actions kicked off in Wisconsin on Monday, February 13, where Voces De La Frontera and partner organizations held a Day Without Latinos, Immigrants, and Refugees to protest Milwaukee Sheriff David Clarke’s plans to collaborate with the Trump administration to deport people. I spoke with German Sanchez, one of the workers who went on strike that day, Christine Neumann-Ortiz, executive director of Voces De La Frontera, and Wilson Hernandez, who days later, in Danbury, Connecticut, was part of another Day Without an Immigrant.

German Sanchez: Let’s say in my lunch break I make emails or text message, when I’m done my day I make a video. A lot of people don’t know how the capital in Madison works, a lot of people don’t know how the law works, even some American people don’t know. The point is I educate myself, I I talk to some lawyers, I talk to some person about Assembly Bill 450, what does it mean, SB533. All those things that I’m learning about it I send out, of course, in Spanish for my community, so they understand the levels a law moves on in the capital, what our options to do against those bills as immigrants are. This is the hard part, to educate people and understand those bills. I do videos maybe twice a day to talk about that and of course I text message back, I answer emails, a lot of questions, a lot of concerns. Of course a lot of people are concerned about the consequences if they don’t go to work.

But with those anti-immigrant bills moving, it’s easy. You can miss one day of work, but if those bills move you can lose everything.

END_OF_DOCUMENT_TOKEN_TO_BE_REPLACED 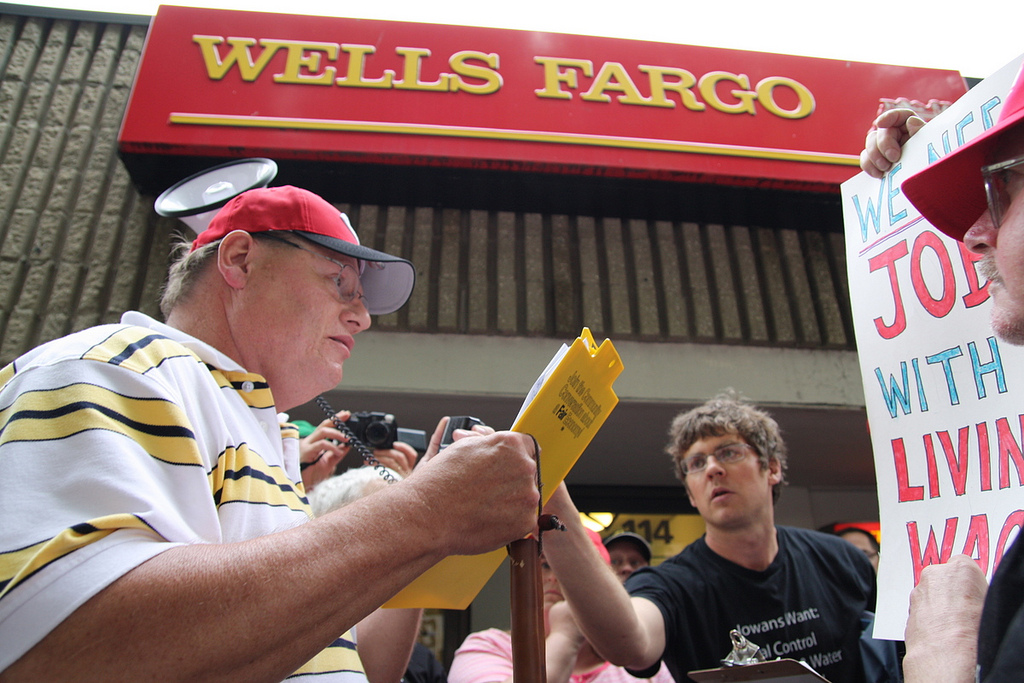 The news that several bills that would make certain protest tactics into felonies has sparked fears of a crackdown on dissent, but Iowa organizer David Goodner says it has also sparked organizing in response.

Stuff like what happened at Berkeley, that is going to be controversial. I think we also have to realize, at least in that sense, confrontation won. When we went to the airports all over the country and confronted and there was really the risk of shutting down these major airports, these major centers, again, of economic activity, we won major concessions from the Trump administration on his bad policy. The Women’s March, having millions of people in the streets, there may not have been a clear cut victory, but I think it did energize and mobilize people to realize that we can win when we stick together, when we develop a mass movement strategy, and when we fight like hell.

We need to take that just as seriously as we take the concerns about property destruction or about people with masks on and how that might look to Middle America, as well. I think people here in Iowa want to stand with somebody who they know is fighting for them. They are not going to care so much about ideology if they can see that there is a movement that has their back and is going to defend their interests. People are going to sign up and join it.